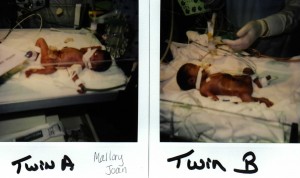 Our twin girls were born January 27, 1994 at 27 weeks gestational age, over thirteen weeks before their due date. Mallory Joan arrived first weighing 2 lb. 6 oz. Macy Annette came second 2 lb. 9 oz. which is actually big for as early as they were (notice in the pic above, the nurse’s thumb is bigger around than their legs). As soon as the airport runways were cleared of snow, both babies were put in one incubator and flown off to Omaha, Nebraska.

Both girls experienced what I found to be normal preemie complications: Respiratory Distress Syndrome (RDS), PDA (heart murmurs), central line infections, retinopathy of prematurity, jaundice, anemia (needing blood transfusions) and hernias. Each girl had their own primary nurse that took excellent care of them. Both girls came off the ventilator at 3 1/2 weeks of age, and I was able to hold them for the first time. They even began feedings. I kept thinking they would surely come home before their due date of April 28th. Their isolettes were even moved closer to the door where the healthier babies were. We knew from the start that Macy was the feisty one as she had to be given Ativan to calm her down and keep her from pulling wires and tubings. Mallory was the more passive of the two babies.

On March 1, both girls hit a milestone of reaching the big three pound mark. I thought that was quite an accomplishment, until the neonatologist called us in the middle of that night to come down as Mallory had stopped breathing, and they were having a hard time re-intubating her. He didn’t think she would make it through the night. That was the longest 2 1/2 hour drive ever, and little did we know how many more trips of the same were yet to come. Mallory was resuscitated by the time we got there, but was now moved to the back wall, a long way from the door home. Mallory experienced seizures and underwent a series of EEGs and MRIs to eventually diagnosis her with periventricular leukomalacia. She also received her first haircut as her central line had gone bad, and she needed an I.V. site. Eventually she would have all her hair shaved off.

I decided to spend the night in the parents’ room, but couldn’t sleep. When I went in to check on Mallory, Macy was now sick too, even sicker than Mallory. Macy was diagnosed with Necrotizing EnteroColitis where the colon become infected and dies. She was soon prepped for surgery. She was too unstable to move to the Operating Room, so the OR came to her. Macy ended up having 10 inches of her small intestine removed. The surgeon gave her a colostomy to let the rest of her bowel recuperate. Mallory inevitably had surgery for NEC also on Good Friday and another one on Easter Sunday. She had a few centimeters of intestine removed from the NEC, along with some ovarian cysts, one the size of a golf ball.

Macy recovered quickly after surgery: off the vent, resuming feedings and moving to an open crib out of the isolette. Then one day no stools were in her ostomy bag; instead she was vomiting them up due to a blockage in her intestine. This led to Surgery #2 for her to remove the blockage and reconnect her bowel. Her reconnection had failed to heal properly and had to be revised in Surgery #3. Macy was now missing a total of 17 inches of large and small intestines. But as usual, Macy bounced back, and they wanted to send her home. Mallory was diagnosed with esophageal reflux, was having a hard time learning the suck-swallow-breathe technique and kept having apnea/bradycardia spells, but they were determined to send her home, too.

The girls came home for three days in May, and I was petrified. I took them into the pediatrician every day. Macy bawled non-stop 24 hours a day. Mallory kept having apnea/bradycardia, and her monitor would go off. I would run, shake and yell at her to remind her to breathe. To top it off, my three year old son came down with the chicken pox. Then, when I noticed blood in Macy’s stool, I packed them both up and drove them to the NICU in Omaha where I knew they could get better care.

The girls couldn’t go back into the NICU considering the pediatrician had given them baby shots, including the live polio vaccine. The girls were moved to the PICU and given the VZig antibody to ward off the Chicken Pox. They were quarantined and received terrible care. I missed their primary nurses who had become attached to “their” babies. Mallory’s problem had been somewhat resolved by putting her on Oxygen. She came home for good on Memorial Day with an oxygen tank and nebulizer machine to add to her equipment.

Macy remained there with no one knowing what was wrong. She was extremely jaundice, her tummy was distended, and her stools were bloody. Everyone thought it was a formula problem, and she tried every special formula made. The residents actually told me they could find nothing wrong with her, so there was no need to consult a surgeon or any specialist. So I took Macy home with all these problems still crying 24 hours a day. I again took her to the pediatrician every day trying new meds and asking to see different specialists.

Finally we saw a pediatric G.I. doctor. He found a problem. She not only had gallstones, she was storing them instead of passing them. She also had C. Difficile. Surgery #4 was now at a different hospital that I thought would have better care. But I thought wrong. One employee left her alone burning a hole in her arm performing a sweat test checking for cystic fibrosis. I wished I could’ve stayed there with her all the time, but living so far away and not having enough trained people to watch Mallory at home, it was next to impossible. And one major problem persisted, a gallstone was missed in surgery and was blocking her bile duct. She had a tube inserted during surgery which was draining her bile, and they were refeeding it to her through her nose. They wanted to send her home like this. I suggested to do another surgery to remove the stone, but the doctor advised me she was too unstable for another surgery. Without my consent, she was given Moctanin, a drug for adults with gallstones that had never been tested on children, and she coded.

We got called down again saying Macy was very sick, and we must come down right away as she may not live through the night. We had heard that phrase so many times that it was like we didn’t believe them. But this time the doctor was even more serious than any other time. I bawled and screamed and prayed. She was so gray and lifeless and bleeding out of every orifice. Medical records showed she coded and it took 45 minutes to revive her. Nobody knew the effects this drug would leave (it has since been taken off the market). But I now know that prayer does indeed work and that Macy is one heck of a fighter to endure all those ordeals because she lived and was able to come home on August 5, 1994.

The roads ahead were not easy as we still spent countless hours in doctors’ offices and hospitals for check-ups, tests and procedures. Both girls are still developmentally delayed, but with the help of special education are almost up to par. They are truly miracles.