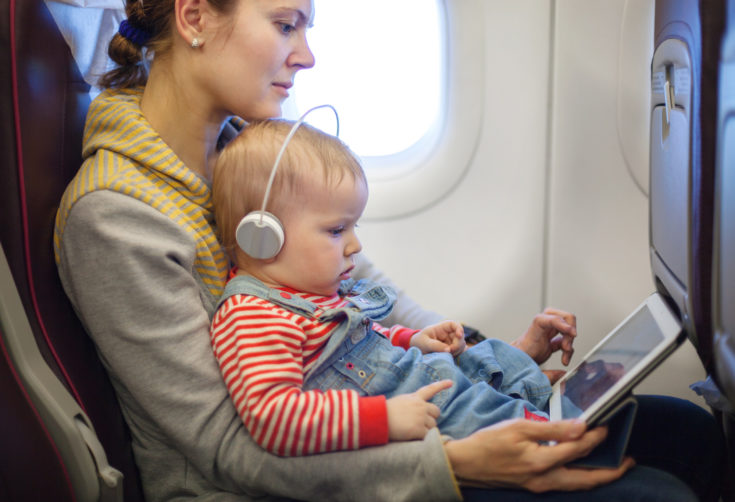 The airport is an exciting place for sensory stimulation; there are the smells of various ethnic restaurants, the sites of the blinking departure signs, the sounds of ‘Flight 237 is leaving from Gate B’ announcements, and the tactile stimulation that comes along with a pat-down by a TSA official.

All of this can be completely overwhelming for a child, whether she is flying on her first or twenty-first flight. As parents, we are well aware that over-stimulated children tend act out, and that is exactly what we want to avoid during our plane trip. What can we do to minimize overstimulation and promote a relaxing flight with our children? Below are several tips and ideas that will enable you to have a calmer journey with your little ones.

Talk about what is likely to happen in advance

About a week prior to your trip, discuss what is likely to happen when you embark on your travels. Describe the process that generally occurs during a normal flight, such as lifting your kid-friendly luggage onto a cart, waiting in multiple lines, weighing the suitcases, displaying your passport, and stowing your carryon in the overhead compartment of the plane.

As you begin packing several days prior to your flight, have a conversation with your child about the familiar things that she will experience in the airport. For example, you may want to plan to eat a meal in a familiar restaurant such as McDonalds in the airport. Bringing along your daughter’s favorite books will give her a sense that she is surrounded by some familiar items in a noisy and unfamiliar environment. Packing homemade snacks will also give your child the sense that some of the comforts of home are accompanying her on this journey.

Allow your child to have his own carryon bag, and help him to pack the toys, games, stuffed animals, and foods that he wants to bring along on the plane. There is so much that our children cannot control, especially when they are in a new environment, so having had the ability to make the decisions about what gets packed in their backpacks will give them more confidence in an unusual location.

Plan happy surprises for the inevitable crankiness or tantrums

Even adults get out of sorts when they are forced to endure endless waits on lines in noisy airports, so it should not come as a surprise that despite our best efforts our kids may act out in the airport or on the plane. Expect some less-than-stellar behavior so that it does not catch you off guard, and be prepared. Bring along several new games, DVD’s, or activity sets for your child to entertain herself when she starts to act cranky. Exciting new foods can also distract a child from bad behavior for a while, so buy some new snacks in addition to the familiar ones.

Remember that your child is just a kid

Although you may have spent an enormous amount of effort planning your child’s comfort and entertainment on the trip, do not be surprised if things don’t go as well as you had planned. After all, children are unpredictable, and there is no way to ensure that they will exhibit wonderful behavior over a long period of time. If strangers stare at you when your child has a tantrum, remind yourself that their kids most likely have even louder tantrums – and that’s why those strangers have left their kids at their grandparents and are traveling sans children!